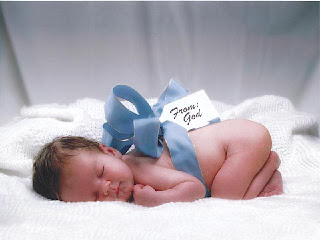 On 31st July, there was a baby born. No Angel appeared to his parent before he was born. But his mother knew that he will come when he kicked that tummy of her. He was born in a comfortable place; a hospital not a manger; with all the latest instruments and machines not with the domestic animals around him. He was lucky... yet his parents don’t think so, they said "He's a gift from God". So he was and is now.

As I read newspaper on Sunday, 25th July 2010 on that beautiful evening, I read the most heart breaking news of all. New Sunday Times reported that on 23rd July 2010, a new born baby girl was found inside a garbage bin outside flats somewhere around Kuala Lumpur area that night. Police chief said the body with umbilical cord still intact was wrapped in a cloth and plastic bag. The news column for this case was only covered 2% of full page on the newspaper and not even in the front page! (It was pg. 11, Oh ya, I should tell you that one of the headline on the news was about Kristen Stewart! da???) You and I know that this is not the first time we hear about it. Out there could be hundred or even thousand of cases that never been told let alone only God knows about it.

An innocent baby was dumped in a garbage bin, inside the drain, in a box, eaten by worms! Imagine that. It was warm (in her mother's womb)... 'huh' that was her first fresh air to breath... 'wa wa wa wa!' that was her first word to speak (repetition is the mother of learning, no wonder we cry alot)... she then slowly opened her eyes, that was her first expose to light... she felt someone holds her. It was warm and familiar, but she doesn’t trace any love so she cries louder. Minutes later, she felt cold, cold as lying on the floor. Suddenly, the light turned to darkness. She can't breath! It was so tight! She can only hear her own voice 'wa wa wa.... wa wa... wa... w... a.....' She’s dead.

A child is a gift from God. Some people say unborn child is not a fully human; therefore they (intelligently) promote and justify ABORTION. Where is the value on human life? Throwing a baby inside a garbage bin is not a choice! Abortion is not a choice!

Someone text me few years ago, telling me about she was pregnant. 'It was an 'accident",
she said. "But I'm not ready; I'm thinking of... abortion."
What a shock to me. I was just 20 years old, what could a young man and immature person ever advice her regarding abortion? (Now I realized that girls normally not asking for advice or anything else, they just want someone to listen to them) I was thinking and thinking... what should I reply... then the most intelligent and very wise answered ever produce at that time come in my mind. I replied, "Don't do it".
That was it! Don't do it. Of course she was not buying into my pleading, she already decided. She aborted the baby. Now I don't know what happen to her, I don't have her contact anymore. She's gone.

Sitting here and writing this note, a thought come to mind. What would I say to her if I receive her text now?
I would send her a Scripture:
"You made all the delicate, inner parts of my body, and knit then together in my mother's womb.
Thank you for making me so wonderfully complex! It is amazing to think about.
Your workmanship is marvelous- and how well I know it.
You were there while I was being formed in utter seclusion!
You saw me before I was born and scheduled each day of my life before I begin to breathe.
Every day was recorded in your Book!"
Psalm 139:13-16

We can make a different. Teach others the Word of God. Share them the Word of God. Copy the Scripture above and memorize it. Photocopy it, and attached it at your room or washroom doors. Stick it at your text books, pencil case etc. Who knows, who knows... someone may read the Scripture and remind you (and me) or your friends (or others) before they about to do or though such a nasty thing. Bible won't save you, no, not that bunch of papers can save you. It’s the Word in the Bible that can save you. "For she will have a son, and you shall call his name Jesus, for He will save his people from their sins" (Matt 1:21) and "His name is called the Word of God". (Rev 19:13)

Posted by Richard Angelus at 12:16 PM

Email ThisBlogThis!Share to TwitterShare to FacebookShare to Pinterest
Labels: Save, Weekly Motivation