Israel first king, Saul, persistently disobeyed God. Prophet Samuel was so disappointed with Saul and refused to see him any longer. (Merajuk lah?) Samuel was filled with grieved and the Lord said to him not to be sad. The Lord instructed him,

"Get some olive oil and go to Bethlehem, to a man named Jesse, because I have chosen one of his sons to be king".
He went to Bethlehem for the Lord had assured him, "... I will tell you what to do. You will anoint as king the man I tell you to." and there he met Jesse and his sons.
When Samuel saw Jesse's son Eliab, maybe he was equivalent to Jung Ji-Hoon a.k.a. Rain a Korean singer; tall and handsome, he said to himself, "This man standing here in the Lord's presence is surely the one He has chosen."
I don't know how they communicate, but surely Samuel was close enough to the Lord when he heard Him said, "Pay no attention to how tall and handsome he is. I have rejected him because I do not judge as man judges. Man looks at the outward appearance, but I look at the heart."
Samuel was humbled. Then Jesse presented seven of his sons, but none was chosen. "No, the Lord hasn't chosen any of these.” Samuel said on behalf of the Lord.
I can imagine that all of Jesse's son were face down, disappointed. Like those who when for American Idol audition, but instead of hearing Paula Abdul's 'Yes', they hear solid "No" from Simon Cowell. 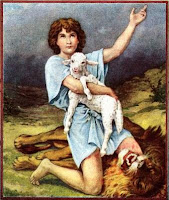 Only after Samuel pressed Jesse did the elder shepherd acknowledge that he had another son. "There is still the youngest...".”Tell him to come here", replied Samuel. Few minutes later (could be hours later), a handsome, ruddy, healthy young man, and his eyes sparkled. The Lord said to Samuel, "Rise and anoint him; he is the one."
His name is David. A multiple talented man. A king, the most honored in the entire nation's history. A man after God's heart.
There are many lessons we can learn from this chapter. A single note couldn't contain the richness of a portion of this Scriptures. But I just want to highlight the uniqueness of our God. When today's generations judge us by how much money do we have, how big your car or house is, pretty or handsome or tall and measure us by 'success' ruler. God remind us today:
"I do not judge as man judges. Man looks at the outward appearance, but I look at the heart."

Hebrew ancient writer writes, 'Do not compliment a person on his good looks. On the other hand, do not look down on someone who is unattractive. Compared to most flying things, a bee is very small, but the honey it makes is the sweetest of foods.'

Posted by Richard Angelus at 7:11 AM