They are asking you now, 'Can you forgive me?'

Then Peter came to Jesus and asked, "Lord, how many times shall I forgive my brother when he sins against me? Up to seven times?" Jesus answered, "I tell you, not seven times, but seventy-seven times. (Matthew 18:21-22)

Coming to the year 2011, it is not difficult to see that many people bring up some 'excessive baggage' of hurts from the past. Forgiveness seems to be the work of a saints, and we reason ourselves that 'I'm only human' and to forgive only can be done by those who have achieved an Angel-ship. This is of course, is not true. Day to day agenda, we sometimes consciously or unconsciously, intentionally or unintentionally; hurts others. To make the story worst, hurt people hurt others. When forgiveness seems to be alien from one lips, it develop into anger, and from anger to stress and all of its bad habits will eventually follow. Soon or later, it kill a person faster than cancer.

Why did Peter asked such a question? I do not know. We may assume what happen but thanks to his boldness, we can hear what Jesus' replied. Jesus said, seventy-seven times. Jamieson-Fausset-Brown Bible Commentary commended, 'Until seventy times seven-that is, so long as it shall be needed and sought: you are never to come to the point of refusing forgiveness sincerely asked'

"Richard, it's easy to say then done.", You may ask me. Well, I may say that it's easier for me to write this down then to speak to you face-to-face. When we read the Scriptures, what Jesus said was never a suggestions, it may be said with a soft spoken tones or with a very kind expressions but none of His Word was just a mere words- His Word is a command speak in a language of love. 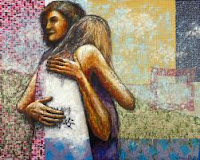 They are asking you now, 'Can you forgive me?' What would you say?

P.s: I'm giving away 2 books of Charles Stanley, The Gift of Forgiveness for free. All you have to do is write to me a short comment on what happen after you forgive others @ when someone had forgive you.

Posted by Richard Angelus at 12:16 AM