[You may skip the bla bla bla below and proceed to application if you want to.] 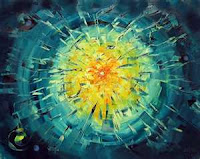 It was one of those days when my secondary teacher asked, ‘What you want to be when you grow up?’ I remember that my first answered was to be an astronaut. Back then I believe that the Universe began with a Big Bang somewhat 15 Billion years ago. With only RM1 per day as my pocket money, I would applied my diet programme and spend most of my break time at the library to read books about the Universe. (P.s: RM1 actually was quite luxury during those time. Don’t believe me? Ask your parent.)

Here are summary about how does the Big Bang works;

1. At first the entire Universe was a hot ball tinier than an atom and much hotter than any star. This swelled much, much faster than the speed of light, growing to the size of a galaxy in just a tiny fraction of a second.


2. As the Universe expanded, it begin to cool and tiny particles of energy and matter, each of them much smaller than atoms, began to form a thick, soup-like material.


3. After about three minutes, gravity started to pull the particles together. Atoms joined together to make gases, such as hydrogen and helium, and the thick ‘soup’ began to clear and thin out. By the end of the third minute, the matter than surrounds us today had been created.


4. Over time, as the young Universe grew larger, the gases clumped into clouds. After several hundred million years, the clouds began to form stars and galaxies.


Scientists believe that because both space and time began with the Big Bang, there may possibly be no time ‘before’ it occurred. They assume that the Universe might end in a Big Crunch, the opposite of the Big Bang.

Until today, I still have my share of curiosity and wonders about many discoveries of the Universe. But not so long until I discovered that there’s another explanation on how the Universe came into existence, and I’m convert by it. The Bible said it was created rather than ‘suddenly’ was there. Genesis 1:1 said ‘In the Beginning, God created the heavens and earth.’ Everything was made by the word of God’s power. He simply said and it was done. God created, that is, made it out of nothing. There was not any pre - existent matter out of which the world was produced. John Wesley writes ‘The fish and fowl were indeed produced out of the waters, and the beasts and man out of the earth; but that earth and those waters were made out of nothing.’
I’m not trying to make fun here but I couldn’t comprehend that there are many brilliant scientists even believe in the Big Bang theory rather than simply acknowledge the Sovereignty of God who created the Universe ‘out of nothing’ (Ex Nihilo in Latin). When I look at the stars in the sky and all that around me, I just couldn’t believe that the entire Universe was first a hot ball tinier than an atom made all this. I’m fully aware that ‘out of nothing’ is also somehow not easy to understand but based on evidences and facts about Universe itself, I rather believe that it was created rather than it happen ‘by chance’.

Application: Most of the time in the midst of our daily life we forget that there’s a Living God who was and is with us. Today we will encounter God’s creation. When we see the beauty around us, let each day remind us to lift our head in praise. Live this life with the assurance that God is Exists and no matter how much the world trying to snatch your awareness about Him, let us remember that our God is Big.

Posted by Richard Angelus at 10:56 PM

Email ThisBlogThis!Share to TwitterShare to FacebookShare to Pinterest
Labels: Inspiration