One of my favorite subjects in school is Science. I had once scolded by my mother because I used her kitchen items and tools to do my ‘evil’ experiments. In science class, teachers teach us theories but I’m more interested on applications. Since 75% of examination questions consist of theories and only 15% lab, I failed my science paper. ……… 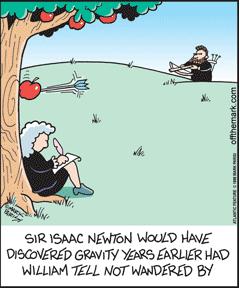 Sir Isaac Newton (1642 – 1727) is one of the most influential scientists in the world also had failed his exam, not science but geometry subject. He failed because he didn’t do his problems ‘according to the book.’ Only after he enters Cambridge University, Newton very quickly showed great interest and ability in Science and Mathematics.

One of his first discoveries was his groundbreaking work on the nature of light. Using the laws of reflection and refraction of light, in 1668 he designed and built the first reflecting telescope. He also invented the concept of integral calculus and discovered the 2nd, 3rd, and 4th laws of motion. In the book You can be a World Changer by Honor Books publisher writes, ‘Although he believed strongly in the validity and applicability of his own work, Newton was a humble man and was reluctant to publish his results. Many of his theories were not public until long after he developed them and then only because a colleague insisted.’
Behind all of his accomplishment, not everybody appreciate his ideas. He received enough critics that would probably bring an average men and women down to size and eventually - giving up. But not Newton, he was a humble man with big dreams. Once he was a school failure but now he had became the most influential brainer.

Have you failed in your exam papers and think that there’s no room for you to improve? Can you humble yourself and realized that only God can bring you up permanently and nothing can compare His love for you even all the achievements of the world?
Newton acknowledged that God is so big that he could do nothing but to humble his heart and pray on his knees to Heaven. He once said, ‘I can take my telescope and look millions and millions of miles into space, but I can lay it aside and go into my room, shut the door, get down on my knees in earnest prayer, and see more of Heaven and get closer to God that I can assisted by all the telescopes and material agencies on earth.’

‘Humble yourselves before the Lord, and he will exalt you.’ (James 4:10)

Posted by Richard Angelus at 6:10 PM