Moses begged, "Send someone else to do it." (Exodus 4)

Benjamin, a new president had some doubt in his mind. He was appointed by his seniors to lead their Christian Fellowship Club during his second semester in college. He told me, “I cannot do this. How can I lead this group of people?” “Yes you can,” I replied without hesitations. I knew him as a timid and low self-esteem person - maybe that’s why he double confirmed with me again, “Are you sure? I cannot do this...”
It was 6 years ago, honestly I don’t know what Christian Fellowship is until I was in 3rd semester in UiTM Samarahan. All I knew was that Benjamin, my secondary school friend from another college is a very potential leader. From a timid and low self-esteem person, he had became a bold and confident person; it was a big transformation took place when he said, “With God’s help I’ll try my very best!”
I remember reading the Scripture about Moses when he debating with God from chapter 3 verses 11 to chapter 4 verse 1 in the Book of Exodus. In a famous Burning Bush scenes, God told Moses he heard the prayers of the Hebrews suffering in Egypt.
Camera-start-action! 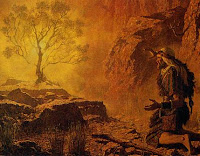 “I am sending you to Pharaoh,” God said. “You will lead my people, the Israelite, out of Egypt”.
“Who am I to appear before Pharaoh?” Moses asked.
God replied, “I will be with you.”
“They won’t believe me,” Moses said.
"Just tell them, “I AM has sent me to you.” said God.
“Look,” Moses replied, “they won’t believe me! They won’t do what I tell them. They’ll just say, ‘The LORD never appeared to you.’ “
Then God showed Moses several miracles as a proof that He sent him to His People.
Moses replied, "I have never been a good speaker. I wasn't one before you spoke to me, and I'm not one now. I am slow at speaking, and I can never think of what to say." But the LORD answered, "Who makes people able to speak or makes them deaf or unable to speak?  …Now go! When you speak, I will be with you and give you the words to say."
Moses begged, "LORD, please send someone else to do it."
(Exodus 4: 10 – 13)
[Refer to Stephen M. Miller's book Who's Who and Where's Where in the Bible]
If I were God, with all this ‘stubbornness’ I would send a fire from Heaven to consume Moses right away… but I’m not. The Lord is a patient God, He agreed to let Moses’ older brother, Aaron, serve a spokesman. That was the beginning of Moses’ ministry but his destiny started long before he was born. He was chosen to lead his people out of Egypt.
Benjamin and Moses started their ministry with these in common; both of them don’t know how to speak in the public, they were timid and most likely with a low self-esteem regarding their own potentials. Do you know what I said to Benjamin when he asked ‘are you sure’? I said, “You’re the one who told me to further my study after SPM and you said I can make a different. Bro, you can make a different too and you have God given potential.”
Have you ever been in a hopeless position at work, school or home? Have you felt trapped and powerless to act?
Just like Benjamin, you were appointed as a leader and you don’t know what to do - don’t give up yet. Read how God equips Moses from the beginning and how God guided him through all his life. Max Lucado writes ‘Remember, God hears our needs and answers in the manner that will help us, serve his will, and often surprise us. Trust God in prayer right now for special guidance today.’

Posted by Richard Angelus at 6:09 AM