Reflection on Deadly 9.0 Earthquake in Japan

9.0 earthquake devastates Japan. Here are some of the news reports: ‘A mother trying to talk to her daughter who has been isolated for signs of radiation.’ ‘More than hundred thousands of people were evacuated.’ ‘A woman yelling for her missing family member in Soma in Fukushima.’ ‘A woman crying while sitting on a road amid the destroyed city.’ ‘Staying alive, survivors cooking and eating in front of their damaged house.’ ‘A woman grief for a tragic lost after she confirmed it was her mother and her three-year-old son bodies under the rubble of her house.’ ‘Millions going without power or running water.’ ‘4 month old baby girl was rescued.’ 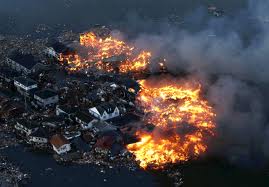 Dead bodies were all over places. Those who are survive starving for foods and water. Even the graveyard was destroyed. The dead thought that they could get away… no, even their dead bodies also been washed away. Misery and desperation. Pain and tears. At this time; advice is not welcome, ‘I told you so’ statements may increase their pain and a words of ‘Everything will be alright’ is definitely not relevant during this time.
When I heard the news in written words, it doesn’t affect me so much. ‘Another disaster happening~’, I said to myself. One morning as I sat at my chair facing my cute mini PC in my solid and well structured room I watched videos from YouTube about the disaster. One particular thing that really bothered me so much up until now is not the visual scenes, though it was a horrible one. It was the cried of children and adults who watched their homeland destroyed by those giants waves.

I can identify with their cry of confusions and agony of their souls. I do. As His children, I asked my Master not out of disobedient or doubt of His majesty and wisdom but out of my confusion, a honest puzzle that been running through my mind as a human being. I asked,
“Why does You allow disasters to happen?”
I heard people said, ‘they deserve this!’, ‘God bring a judgment upon this ungodly nation.’, ‘it happen to everyone…’ , ‘Oh no, there will be no more sushi, manga (comic), latest gadgets etc.’ , ‘Thanks God for this!’ and many more rubbish comments. The only hope that I can really rely on is the Bible.
Why? I don’t know. If I know, God’s throne should be mine but I’m not Him. Reasons only God knows. But one thing I surely know: he allows disasters to happen, not only to the ungodly but also to godly people. ‘Your Father in heaven… sends rain on the just and the unjust alike.’ (Matthew 5:45) He may allow a disaster to happen in order to get attention and to draw people back to Himself. Isn’t it true? In our personal life, is it during our tough time or challenging moments that we really seeking God for help and comfort? In Job 36: 15, ‘By means of their suffering, he rescues those who suffer. For he gets their attention through adversity.’ Japan and the entire nation of the world will fix their eyes on the Lord. Question: Will you give your attention and draw back to Him again?
Sometimes a disaster can be the result of sin. It can be the result of your own sin or the ripple effect of someone else’s disobedience to God. ‘As surely as the Lord your God has given you the good things he promised, he will also bring disaster on you if you disobey him.’ (Joshua 23:15) A word of warning: Do not judge Japan by saying ‘this is what happen to a sinful nation’. Who are we to condemn people?! If you really believe that every sin need to be punish and say that ‘Japan deserve such a disaster!’ may I ask, “How about your sins?” or much better in a words of my friend, Lee Chun Chung, “Do you think that you are more righteous than those people in Japan?” Question: What are you gonna do about your own sin? Would you receive His forgiveness by believing that Jesus Christ died on the cross on behalf of your sinful punishment?
Sometimes disaster is man-made, like war happening at Middle East and some parts of the world. Example, a young man decided to kill himself by committing suicide. Would you say God made him decided to die? Of course not! Question: Ask yourself; is it because of my own foolishness or God influence my free will to choose that I end up with this disaster that you are in right now?
This verse really brings comfort to my soul, ‘We know that God causes everything to work together for the good of those who love God and are called according to his purpose for them.’ (Romans 8:28) I heard a very wise insight by one of the student at INTI Nilai College today. She said, ‘In the midst of this disaster, in our human point of view there is nothing good can come out from this… But I know that good thing will happen soon or later… people in Japan will return back to God, everyone will rise up helping one another.’ What seems like a disaster for us, God may use it as His way to bring out ‘the good of those who love Him’
With all this, I’m amazed by His Word. I never fully get a satisfy answer to my ‘whys’ maybe because He knows that I haven’t got the capacity to understand the answer. In learning to depend on God, we must accept that we may not know all the answers, but we know WHO knows the answers. Remember this that God himself is always with you in the midst of disaster.
Final question: It’s not wise to ask, ‘Okay, I get it… but of all the nations in the world, why God allows this disaster happens to Japan?’ rather ask yourself, why it doesn’t happen to me?
God have a purpose in your life: maybe it’s a second chance for you to follow Him, a wake-up call from your slumberness and lukewarm faith, a change for you to witness about the Good News to your friends, family and others or perhaps He wants you to be His witness for His second coming. The words of God through prophet Zephaniah give us the assurance about our coming future,

“The Lord Himself, the King of Israel, will live among you! At last your troubles will be over, and you will never again fear disaster.”

Posted by Richard Angelus at 6:27 PM