Pre-Christmas Message: Myrrh for a King (Part 3 of 3)

“[Scholars from the East] entered the house and saw the child [Jesus] in the arms of Mary, his mother. Overcome, they kneeled and worshiped him. Then they opened their luggage and presented gifts: gold, frankincense, myrrh” (Matthew 2:12, The Message).


I found a set of gold earring (see Part 1). I found my clothes and it smells so good (see Part 2). And then I had a headache; partly because I inhale too much fabric refresher and partly because I stayed up late at night. So I took 2 tablets of Panadol for instant relief. I can’t stand the pain. It was like a miniature Metallica rock concert in my head. Oh, I was in pain and then no more... 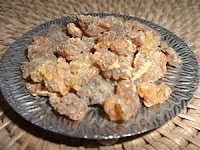 The Scholars from the East entered the house, saw Baby Jesus, kneeled, worshipped Him, opened their luggage and presented gifts. One of it was “myrrh”. What is myrrh? Myrrh was (some info that I read from the Bible Dictionary) a gumlike substance with a bitter taste that was used in Jesus’ day as a medicine, and also for the purpose of embalming bodies after death. Jesus was offered “wine mixed with a drug called myrrh, but Jesus would not drink it” (Mark 15:23,TEV) because it would have deadened His senses somewhat to the pain He was suffering for us upon the cross. If Jesus didn’t took the pain on the cross fully (if He took painkillers such as Panadol, as I would suggest stupidly if I were there), it mean He didn’t really bore all our sins. But Jesus really took the fullness of suffering and all the pain on the cross to redeem us back to God. “It was our sins that did that to Him, that ripped and tore and crushed him – our sins! He took the punishment, and made us whole. Through His bruises we get healed” (Isaiah 53, The Message).


The celebration of Christmas then for Christ-believers is a called to live a sacrificial life as it was displayed by Christ on the cross. Questions: Do we sometimes want our own way? Do we often put ourselves first? Do we expect that everything should go just as we want it to? Or are we willing to sacrifice our desires for the desires of others? Finally, are we willing to sacrifice our time, our money, so that the gospel may be carried to others? Ask yourself...
Merry Christmas!
THINK BIG. START SMALL. GO DEEP.

Posted by Richard Angelus at 8:52 PM