In C.S. Lewis’s book Narnia: The Lion, The Witch and the Wardrobe, Edmund had been enslaved by the White Witch. He had been foolish and rebellious and evil and traitorous. And he had fallen under her power. 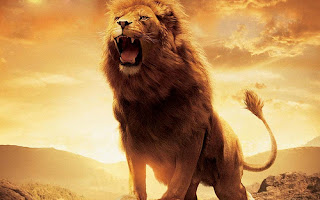 When the Great Lion, Aslan, came to rescue him, the wicked Witch reminded him of the Deep Magic that was written on the Table of Stone – that every traitor belongs to her and she has a right to the blood of every sinner.

But, to the amazement of all, after Aslan spoke to her privately she let the boy go. Later that night, Aslan surrendered himself into the witches’ camp. They took him, shaved off his magnificent mane, ridiculed him, beat him, spat on him, and tied him to the Table of Stone. The Witch whetted her knife, drew near him, and plunged in into the lion’s heart, killing him.

In the distance, Aslan’s dear friends, Lucy and Susan, cried and cried, and the next morning, they arrived sadly to discover his body. But they found the Stone Table broken, and the body of Aslan was nowhere to be seen. Suddenly they turned around and found him larger than they had ever seen him, shaking his magnificent mane, fully and physically alive.
They hugged and kissed him, weeping with joy, then asked him,
“But Aslan, what does it mean?” 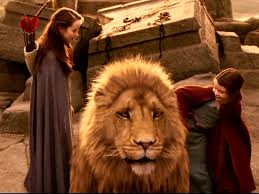 This was Aslan’s reply: “It means that though the witch knew the Deep Magic, there is a magic deeper still which she did not know. Her knowledge goes back only to the dawn of Time. But if she could have looked a little further back, into the stillness and darkness before the Time dawned, she would have read there a different incantation. She would have known that when a willing victim who had committed no treachery was killed in a traitor’s stead, the Table would crack and Death itself would start working backwards.” 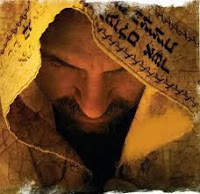 I love the Narnia trilogy, but I love more the Gospels. Aslan, the Great Lion is a character-type of Jesus Christ, the Lion of Judah. Aslan is fictional, but Jesus is real. On the Cross, Jesus paid the penalty for our sins, treacherous and rebellious against God. Buried in a tomb, He rose again three days later as proof that His mission to conquer sin and death had been accomplished. He was “killed in a traitor’s stead” – us and thus, death “working backwards”.

In the Gospels, Jesus claimed to be much more than a wise man or great teacher. He claimed to be God – a God willing to die for His creation so that our love relationship with Himself could be restored (see Romans 5:10-11). Through his birth, life, death, and resurrection, Jesus fulfilled the hundreds of prophecies in the Old Testament that foretold of a coming Messiah, a Savior not only for the nation of Israel, but for the whole world (1 Timothy 4:10).

Posted by Richard Angelus at 10:23 AM