With the Wild Men of Borneo

“To know God and to make Him known.” (Loren Cunningham)

Borneo lies almost exactly under the equator, and is one of the larger islands in the great East Indian Archipelago. It is 830 miles long and 600 miles wide. The size of this island may be appreciated by a comparison of its area with that of a part of Great Britain. It is roughly five times as large as England and Wales.

Little is known of the early history of Borneo, although European navigators and trades touched it shores about the year 1511, in search of the riches of the East. The Portuguese were the first to establish commercial relations with the island; and during the sixteenth century, Spanish traders tried, with some success, to obtain a share of this profitable commerce.

The formation of the Dutch and British East India companies destroyed the monopoly so long enjoyed by the earlier traders, with the Dutch taking the lead throughout the Malay Archipelago.
The rich cargoes of the trading vessels offered great temptations to the unprincipled natives of Borneo and adjacent islands; and piracy become such a menace to the lives and property of the European traders that efforts were made to stamp out the nefarious business.

One of the British expeditions under Sir James Brooke, in 1838, was very successful in suppressing piracy, and gained for the British considerable prestige with the natives of Borneo. This aggravated the rivalry between the Dutch and the British in their efforts to control the trade and not until 1891 were the boundaries of British and Dutch Borneo finally defined. The north and the west coast are now (at this writing it was 1922) under British rule, and in these districts the most successful missionary efforts have been conducted. The work of Pastor Mershon and his capable in British Borneo shows what the Gospel can accomplish in changing the hearts and lives of such unpromising people as are found in these far off regions.

This little book, With the Wild Men of Borneo, is sent out with the assurance that it will do its part in stimulating the reader’s interest in the great work now going forward – “The Gospel to All the World in This Generation.” 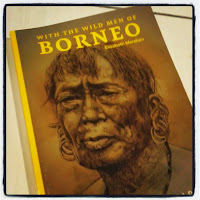 Happy New Year 2014! This month of January 2014, I would like to offer you 3 BOOKS (ONLY) entitled With The Wild Men of Borneo by Elizabeth Mershon.

You are welcome to get a copy of this book for yourself by simply do these 2 things:

Posted by Richard Angelus at 5:11 AM