Jesus' Family Misunderstood Him (A Reflection on Mark 3:20-21)

“Then Jesus went home. Again such a large crowd gathered that Jesus and his disciples
had no time to eat. When his family heard about it, they set out to take charge of him,
because people were saying, ‘He’s gone mad!’” (Mark 3:20-21, GNB). 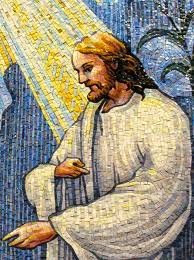 People still following Jesus wherever and whenever he went. He had healed the sick, exorcised evil spirits, spoke with authority, forgave someone’s sins, breaking the religious man-made rules – and choosing the Twelve apostles. All of these had caused people to forms opinion about Him. Anyone who had been close to Jesus for quite a long time will eventually must come to some sort of verdict about Him.

The first verdict we read here is: “He’s gone mad!” or “He is out of his mind!” (NIV) The first thing I observe about Jesus (and His disciples) is the kind of pressure He often lived under until He “had no time to eat.” The first group of people who misunderstood Him was His own family members. These three matters alone (not to include many other things to follow) would have been hard for the humanity of Jesus to bear.

As a Christian full-time worker I can identify with Jesus’ situations, though not fully. There were times when ministries works at hand take priority over an empty stomach. Sometimes dealing with people’s needs, meeting people and doing ministry preparations consumed lots of time and energy that I not just have no time to eat, but often forget to eat! My mother once told me that “You’re crazy! What is your job actually?” Because she observed that I always come back home at odd time, work during weekends, stayed many nights at camps, stayed up until early morning, went to campuses and mission trips, traveled by land and air going here and there. “You’re crazy!” she said. And this is my mother, you know. Well-meaning concern but no matter how much I tried to explains, she always misunderstood my works.

Now come back to Jesus…

His family were also misunderstood Him. Out of their genuine concerns, they really want “to take charge of him” because they were worried for Jesus’ well-being (“no time to eat”) and Jesus’ reputation (“people were saying, ‘He’s gone mad!’”) A lot of people all over the country followed Him, always confronting with the religious authorities, and remember this also – He choose nobodies, outcasts, middle-class, ordinary people as His apostles. These were the madness that everyone was taking about! These were reasons why His loved ones care so much. These matters had taken His security and safety away from Him.  The people don’t understand Him. His family doesn’t understand Him. I think His newly appointed apostles also don’t understand Him fully. I, honestly, sometime don’t understand why He does what He does and said what He said!

We all are guilty of misunderstood Jesus one way or another. Perhaps, we also had misunderstood people in the same way. And that’s okay, it’s human. See, Jesus doesn’t rebuke His earthly family for thinking that way (only don’t accuse wrongly like the teachers of the Law later). As closing, ask yourself these two questions: 1) Have you ever been misunderstood by those who closest to you because of your commitment to Jesus Christ? (Remember, Jesus understand). 2) Have you misunderstand Jesus and make impossible demands upon Him in spite of your outward relationship with Him? (P.s.: Don’t try to assume Him)
THINK BIG. START SMALL. GO DEEP.

Posted by Richard Angelus at 9:23 AM