Simple Book Review: A Force in the Earth: The Charismatic Renewal and World Evangelism

“A Force in the Earth: The Charismatic Renewal and World Evangelism” (1989)
by David Shibley

This book is re-subtitled to “The Move of the Holy Spirit in World Evangelization” (1997). First thing I have to say is that it is a passionate and challenging book which point readers the way forward for charismatic Christians in mobilizing for world mission. “World evangelization can never be accomplished by charismatics alone,” writes Shibley, “Neither can it be accomplished without us.” The author are focusing on the charismatic movement, evangelism and mission to the world. C. Peter Wagner, founder of New Apostolic Reformation, recommend Shibley as a charismatic milieu but he “does not say that to win the world you should be like us or do it our way. Instead he says that noncharismatics will not do it well without charismatics; neither will charismatics do it well without noncharismatics.” 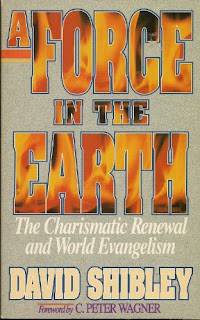 In Jesus’ ministry and in the ministries of the early disciples, some kind of “power encounter” often verified their Spirit-anointed gospel proclamation. What is power encounter?  It is “a visible, practical demonstration that Jesus is more powerful than the false gods or spirits worshiped or feared by a people group.” For examples, the author showed that Jesus saw miracles or power encounters in Matthew 11:4-5 as the verifying credentials of His ministry; Philip was not only preaching Christ but also doing a deliverance ministry and miracles so that people were not only hear, but they “hearing and seeing” the gospel (Acts 8:5-8); and Paul most of the time not only preached the Word but also “in word and deed” and “signs and wonders” (Rome 15:18-21).  Shibley rightly observed that in missionary strategy, evangelicals have emphasized proclamation (Word), the mainline denominations have stressed the social implication of the gospel (Work), and the Pentecostals and charismatics have given high profile to signs and wonders (Spirit). We all must employ all three!

Basically I like this book, but not without my evangelical theology biases. Shibley sometimes can be too optimist that may – in my opinion – pushing too much on the Word to fit the charismatic doctrines, especially in the area of prophesies. For example, he believes that the task of Great Commission will be completed by A.D. 2000. Now is 2016! Nevertheless, since I’m living in Sarawak where the population of Christian is almost 50% and mostly are charismatics, I find that this book is helpful in so many way. I see it as a positive calling of unity among the Evangelical and Charismatic churches in the world missions.

[P.s: This book remind me of David Pawson’s “Word and Spirit Together: Uniting Charismatics and Evangelicals.” To be honest, I think that Pawson have greater points that Shibley. And I also would like to recommend two books by John MacArthur on issues against (troublesome) Charismatic movements, namely, “Charismatic Chaos” (1992) and “Strange Fire” (2013)]

Posted by Richard Angelus at 12:37 AM