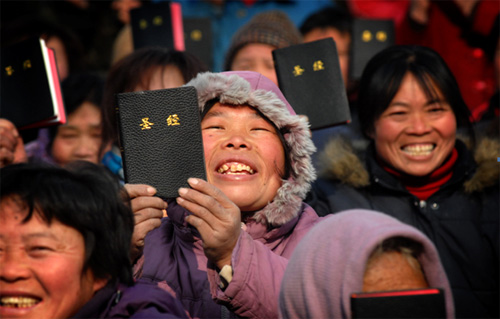 In May 2017, several men split into three small groups to cross into mainland China. With bags stuffed with Bibles, they timed their entries 20 minutes apart to increase their odds of getting copies of God’s Word into the communist country. The final group and a member of the second group, however, were stopped by customs officials in Shenzhen, one of China’s largest cities, while on their way to Guangzhou. The men were detained for 10 hours and, after being questioned by 50 officials, were banned from the country for three years.

The men, plus another Bible smuggler not tied to their organization who happened to be crossing into China at the same time, were interrogated for six hours. Officials confiscated everyone’s Bibles and other Christian materials. “These books are forbidden in China,” one official said, pointing to the Bibles. “They are foreign-published.”

Since opening in 1987, China’s only government-approved Bible printer, Amity Printing Company, has printed more than 115 million Bibles. However, the majority of these Bibles are for export. The relative few that remain in country are sold by China’s official Three-Self Patriotic Movement churches. Even so, Amity alone cannot meet the Chinese citizens’ demand for the Bible, as Bibles wear out and as new people become believers.

During the men’s detainment, most of the 50 officers looked through the materials and flipped through the Bibles. Many officers wore body cameras and recorded everything. At least two officers remained with each worker and monitored their every move — even while they were in the restroom. The smugglers had to sign a paper admitting they broke laws regarding Bible smuggling and each paid a small fine. They were then transported in police vehicles to the district police office, where they were held for another four hours while officials processed their passports. Once finished, they were forced to sign deportation papers and were told they are not allowed back into China for three years. Armed police officers and undercover agents then drove them to the border and made sure they bordered a bus back to Hong Kong.

One smuggler said he only felt love and forgiveness for the officials involved during the ordeal.“I felt bad for them because they didn’t realize they were barring the one thing from their country that would bring good news and hope and truth to them,” the man said. “The love that I experienced for these officials was the same love that sent Jesus to the cross, and the same love that caused him to cry out: ‘Father forgive them; for they know not what they do.’”

Posted by Richard Angelus at 4:59 AM