Book Review: Secrets of Watchman Nee: His Life, His Teachings, His Influence (2005) by Dana Roberts 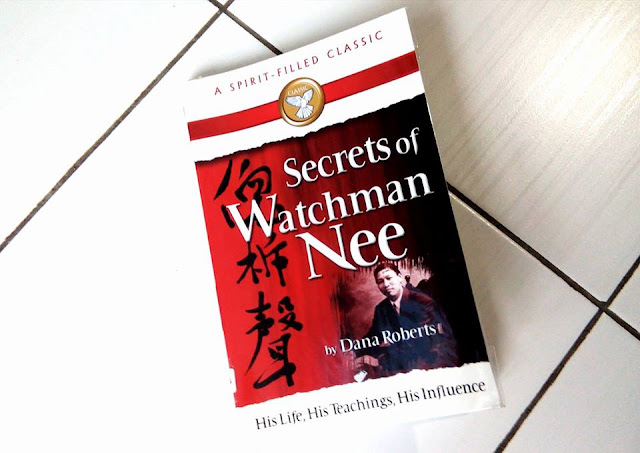 Secrets of Watchman Nee: His Life, His Teachings, His Influence (2005)
by Dana Roberts

At first when I saw this book, I really thought it is about Watchman Nee’s life, teaching and influence, his chronological biography and what are the secrets of his effective ministry (I borrowed from our church’s library). But no… it is more about a “thoughtful, insightful analysis” of the ‘real’ Watchman Nee and his ‘secret’ life. In the beginning, the author presents this book as pro-Watchman Nee. But after I read the first chapter, I realized that what he said about “constructive criticism” is actually a cultural and theological attack. This remind me of a minister I know personally who always point that other churches is wrong, and in the end, causes people to stumble over small issues. It is not about major theological issue at all!

Dana Roberts is entitled to his opinion and it is okay if he disagree with Watchman Nee's teachings (I think he should retitled it as A Critic on Watchman Nee’s Teachings). But I take issue with the extremely deceptive presentation of his book. Anyone looking at the book will be tricked into thinking the writer is fairly presenting Nee's teachings but it’s not. I love books published by Bridge-Logos but this one is a disappointment.

First chapter, Roberts deal with these questions: “What training and life experiences prepared [Nee] to lead others on the way to spiritual maturity? Is the Bible, inspired by the Holy Spirit, the sole compass of his faith? Or has some less accurate device detoured him away from the Christian ‘walk in newness of life’ (Romans 6:4)? Are his ideas pragmatic? In other words, do they really do what he says they will do?” Chapter two deal with the content of Nee’s theology and the last three chapters are about the ideas of Nee’s theology, namely, the Word of God, anthropology and ecclesiology. Here is the contents of this book:


I read this book rather quickly and to me chapter 3 is worth reading and all of Nee’s quotations are good. Even some of Roberts’s thoughts are fantastic. For example, his observation about two categories of avid readers of Watchman Nee is accurate: 1) They love God and want to know more about the one they love; and 2) They love God and want to be right at all times [These two categories can also be apply to the so called young-and-reckless Calvinists today]. But overall, I still think it is a disgraceful to Watchman Nee rather than “constructive criticism.” Roberts have the tendency to make bad rumours about Nee equivalent to fact (that also of Witness Lee). Of course he try to be fair and nonbiased but throughout this book I can sense his ‘persuasive’ rejection to Nee’s theology.

Watchman Nee is a faithful servant of God, but not without controversy and mistakes. All of God’s servants are not perfect, except One. Abraham, Moses and David slipped up. Even Peter had failings as a Christian leader. We all make errors. Martin Luther, John Calvin, Spurgeon make mistakes. If you try hard, you can find a lot in me… This “constructive criticism” is not constructive at all. It is a destructive of Nee’s reputation. Until proven unfaithful and theologically heretic, we should protect and back up one another – brothers and sisters in Christ.

Posted by Richard Angelus at 4:12 AM