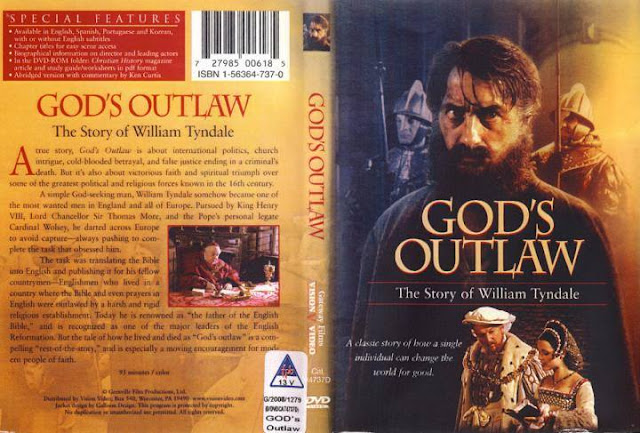 Who is William Tyndale [1494-1536]? He is the translator of the first English New Testament! Most of the English Bible translations today owe (of course to God the Supreme first) to Tyndale, and thus, to know him is to know the Story of the Bible. This movie (produced in 1986! So, forget about graphic and film quality, just focus on contents ya) set in the colourful and dangerous days of King Henry VIII when men were burned, racked, and maimed for lesser crimes than that of smuggling Bibles – especially Martin Luther’s translations – into England. The movie opens with a young child reciting The Lord’s Prayer in English and thus her parents were taken to jailed and killed for teaching their children to pray in English instead of Latin.

Once when someone said to Tyndale, “We are better to be without God’s laws than the Pope’s.” He replied, “I defy the Pope and all his laws. If God spare my life ere many years, I will cause the boy that drives the plow to know more of the scriptures than you!” When Tyndale set out to provide the first printed New Testament in English (based on Erasmus's Greek Bible) he was forced to defy the king, the Roman Catholic pope, and all other authorities. Thomas Moore, his archenemy (but a bit soft in the movie) once said about Tyndale translation: “not worthy to be called Christ's testament, but either Tyndale's own testament or the testament of his master Antichrist."

Compelled to flee from England, he continued with his work of translating the Scriptures while hiding out in several cities in Germany, Holland and Belgium – always trying to keep a step ahead of the agents who were sent from England to arrest him. For the rest of the story you got to read Tyndale’s biography. I suggest for a start read 1) Heroes of Faith: William Tynadale, and 2) God’s Outlaw by Brian Edwards and/or watch this movie. You’ll appreciate your Bible – free-to-own-Bible! – more.

Tyndale was betrayed by his friend Henry Phillips, thus in 1536 he was arrested and was tried and convicted of heresy and treason and put to death by being strangled and burned at the stake. In the movie, his last words before his death were “Lord, open the king of England's eyes.” Just 3 years later Henry VIII published his English ‘Great Bible’ based on Tyndale’s work. His work formed the basis of all subsequent English translations of the Bible, including the King James Version of 1611. William Tyndale wrote: “I perceived how that it was impossible to establish the lay people in any truth except the Scripture were plainly laid before their eyes in their mother tongue.” His dreams came true but not without a cost. So, what it cost you to not read the Bible?

Posted by Richard Angelus at 3:30 AM