Lord, Heal My Tongue: The Importance of Your Confession (Part 9/9)


We need to see how the right use of the tongue links us in a very special way to Jesus Christ as our High Priest. The high priesthood of Jesus is an eternal ministry that goes on continually in heaven. After He had dealt with our sins, died, risen again and ascended into heaven, He entered into a ministry as our High Priest forever, always representing us in God's presence. He is our High Priest on the condition that we make the right confession with our tongues.
[This is a reading from Derek Prince's Does Your Tongue Need Healing? (1986) by Derek Prince Ministries International. Published by Whitaker House] #ServeToLead #HealMyTongue
_____________
FB Page: https://facebook.com/LEGASI.tv/
Podcast: https://anchor.fm/LEGASI.tv/
Instagram: https://instagram.com/legasi.tv/
YouTube: http://bit.ly/LEGASItv
Blog: https://www.richardangelus.me/

Posted by Richard Angelus at 11:53 AM 0 comments

Lord, Heal My Tongue: The Reason You Have a Tongue (Part 8/9)

"Our tongues are our glory," said Derek Prince. You might ask why. The answer is because the Creator gave each of us a tongue for one supreme purpose - to glorify Him. The only reason for a tongue is that with it you and I may glorify God. That is why our tongues become our glory. It is the member by which, above all others, we may glorify the Creator.
[This is a reading from Derek Prince's Does Your Tongue Need Healing? (1986) by Derek Prince Ministries International. Published by Whitaker House] #ServeToLead #HealMyTongue
_____________
FB Page: https://facebook.com/LEGASI.tv/
Podcast: https://anchor.fm/LEGASI.tv/
Instagram: https://instagram.com/legasi.tv/
YouTube: http://bit.ly/LEGASItv
Blog: https://www.richardangelus.me/

Posted by Richard Angelus at 11:47 AM 0 comments

Let us look at three simple, practical, scriptural steps to dealing with the problem of your tongue. Take these steps and see to it - that your tongue be healed.
[This is a reading from Derek Prince's Does Your Tongue Need Healing? (1986) by Derek Prince Ministries International. Published by Whitaker House] #ServeToLead #HealMyTongue
_____________
FB Page: https://facebook.com/LEGASI.tv/
Podcast: https://anchor.fm/LEGASI.tv/
Instagram: https://instagram.com/legasi.tv/
YouTube: http://bit.ly/LEGASItv
Blog: https://www.richardangelus.me/

Posted by Richard Angelus at 11:45 AM 0 comments

God has made a provision in Scripture for the healing of our tongues. The first step in acquiring this is to identify the root of the problem. The testimony of Scripture is clear and unequivocal: the root of every problem affecting our tongues is in our hearts.
[This is a reading from Derek Prince's Does Your Tongue Need Healing? (1986) by Derek Prince Ministries International. Published by Whitaker House] #ServeToLead #HealMyTongue
_____________
FB Page: https://facebook.com/LEGASI.tv/
Podcast: https://anchor.fm/LEGASI.tv/
Instagram: https://instagram.com/legasi.tv/
YouTube: http://bit.ly/LEGASItv
Blog: https://www.richardangelus.me/

Posted by Richard Angelus at 11:42 AM 0 comments

We have studied an example from the Old Testament that illustrates how "death and life are in the power of the tongue." We learned that the right use of the tongue will impart life, and, conversely, the wrong use will impart death. Now we will consider certain specific diseases that affect our tongues. These six (6) diseases that commonly infect our lives through the misuse of our tongues can, in some cases, be fatal if left unchecked.
[This is a reading from Derek Prince's Does Your Tongue Need Healing? (1986) by Derek Prince Ministries International. Published by Whitaker House] #ServeToLead #HealMyTongue
_____________
FB Page: https://facebook.com/LEGASI.tv/
Podcast: https://anchor.fm/LEGASI.tv/
Instagram: https://instagram.com/legasi.tv/
YouTube: http://bit.ly/LEGASItv
Blog: https://www.richardangelus.me/

Posted by Richard Angelus at 11:38 AM 0 comments

In the Book of Numbers chapter 13 to 14, there are 10 spies focused on the problems, not on the promises. But there are 2 spies, Joshua and Caleb, focused on the promises, not the problems. They said, "We are able"; the other 12 said, "We are not able." Each got exactly what they said. They all settled their own destinies by the way they used their tongues.
[This is a reading from Derek Prince's Does Your Tongue Need Healing? (1986) by Derek Prince Ministries International. Published by Whitaker House] #ServeToLead #HealMyTongue
_____________
FB Page: https://facebook.com/LEGASI.tv/
Podcast: https://anchor.fm/LEGASI.tv/
Instagram: https://instagram.com/legasi.tv/
YouTube: http://bit.ly/LEGASItv
Blog: https://www.richardangelus.me/

Posted by Richard Angelus at 11:36 AM 0 comments

It does not matter how religious we may claim to be. We may attend church, sing hymns and do all the other things that are expected of religious people. In themselves, all these things are good. We may do all those things, but if we do not keep our tongues under control, our religion is worthless and unacceptable to God. Listen to this: "If you claim to be religious but don’t control your tongue, you are fooling yourself, and your religion is worthless" (James 1:26) Do you need healing for your tongue?
[This is a reading from Derek Prince's Does Your Tongue Need Healing? (1986) by Derek Prince Ministries International. Published by Whitaker House] #ServeToLead #HealMyTongue
_____________
FB Page: https://facebook.com/LEGASI.tv/
Podcast: https://anchor.fm/LEGASI.tv/
Instagram: https://instagram.com/legasi.tv/
YouTube: http://bit.ly/LEGASItv
Blog: https://www.richardangelus.me/

Posted by Richard Angelus at 11:34 AM 0 comments

Lord, Heal My Tongue: Out of the Heart It Overflows (Part 2/9)

There is a direct connection between the heart and the mouth. Jesus states, "A good man out of the good treasure of his heart brings forth good words; an evil man, out of the evil treasure in his heart brings forth evil words" (read Matthew 12:33-37). If the heart is good, then out of the mouth or tongue will come words that are good. But if the heart is evil, then out of the mouth will come words that are evil. Does your tongue need healing?
[This is a reading from Derek Prince's Does Your Tongue Need Healing? (1986) by Derek Prince Ministries International. Published by Whitaker House] #ServeToLead #HealMyTongue
_____________
FB Page: https://facebook.com/LEGASI.tv/
Podcast: https://anchor.fm/LEGASI.tv/
Instagram: https://instagram.com/legasi.tv/
YouTube: http://bit.ly/LEGASItv
Blog: https://www.richardangelus.me/

Posted by Richard Angelus at 11:30 AM 0 comments

Posted by Richard Angelus at 11:25 AM 0 comments 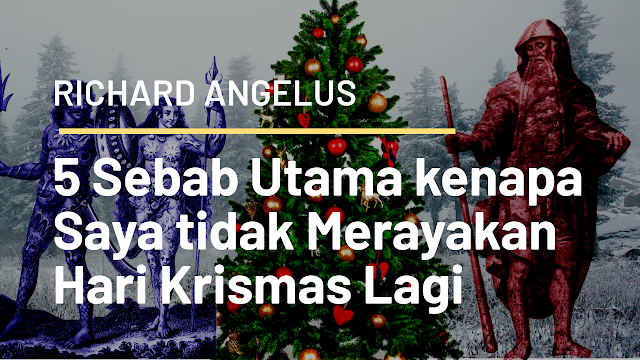 It's All About Jesus: 44 Short Studies of 1st Epistle of John (YouTube & Podcast) 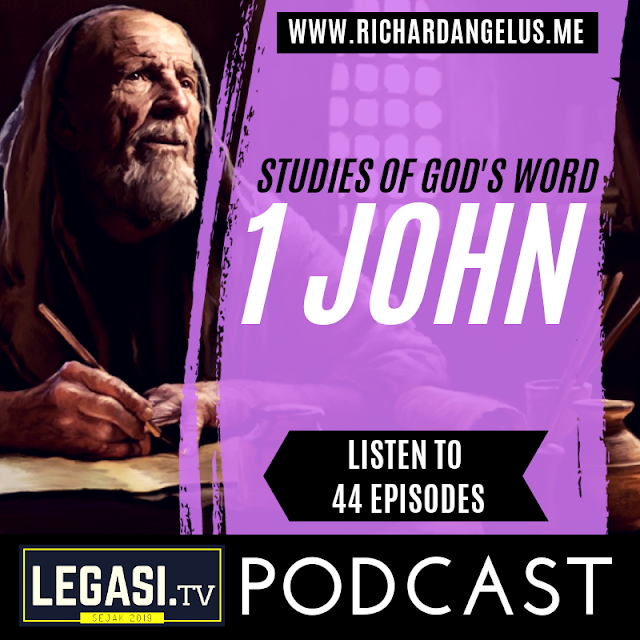 As you glance through the Bible you will see that some of the books (like the Psalms) are over a hundred pages long while others (like 2 John) are less than a page in length. 1 John is one which is not very long – about 5-7 pages in most versions (like my J. B. Phillips’s New Testament have 8 pages only). But this short book – a letter or an epistle – is packed with a great deal of vital information about our faith and many helpful guidelines regarding how to live as followers of Jesus Christ. Yes, 1 John (or the First Letter of John) is for Christ’s disciples not for non-Christians.

But before we begin our study of 1 John, let’s consider a few important questions:
Who Wrote It and Why? 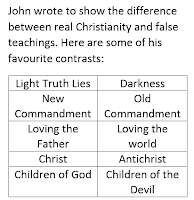 In the early Church, there was general agreement that the Apostle John wrote the letter (not John the Baptist!). For one thing, the subjects, style and wording of 1 John are like those in the Gospel of John. Also, the writer of 1 John claims to have been an eyewitness to the death and the resurrection of Jesus Christ, our Lord (see 1 John 1:1,3 and 4:14). Furthermore, the author of 2 and 2 John refers to himself as “the elder.” These two letters, along with 1 John, have usually been thought to have been written by the same author. Often in his later years, John was called “the Elder.”

After serving for years as a disciple of Jesus, John spent a great deal of his time writing the Gospel according to John (or the Gospel of John), which describes the life and times of Jesus; 1, 2, 3 John which help Christians understand what they should believe and do; and the Revelation, in which he talks about the glorified and the second coming of Jesus.

We may tend to think or depicted Jesus’ disciples as saints who walked around with halos over their heads. Nah! John was a man who was very much a human being like the rest of us. Even though he talked often in his writings about love and forgiveness, he evidently had a hot temper. At least, he was. Jesus once called John and his brother James “sons of Thunder” (see Mark 3:17). One time, John got so angry – maybe he was very jealous – that he wanted God to destroy a village with fire, something Jesus refused to do (see Luke 9:51-56).
What Was the Setting?

In his later years, John settled in the city of Ephesus, a place where Christians were struggling with the teachings of false teachers and were tempted to leave their own faith. These false teachers or prophets denied that Jesus was really God’s Son (see 1 John 2:22). These teachers were claiming to be “in the light” but did not really care how they lived. They were unloving and sinful even as they claimed “special knowledge” regarding God. These false teachers were true liars, hypocrites!

In his own special way, John wrote a letter to his fellow believers (“my children”) to try to reassure and strengthen them. He wrote this letter as elder (authority) and as grandfather (relationship) to his children and grandchildren – a letter packed with wisdom, advises, encouragements, helps, truths and warnings. John was also concerned that the faith of some Christians was becoming more of a ritual than something real and active. By the time John wrote this letter (about A.D. 92, shortly after writing his Gospel), the thrill of being true believers in the early days of Christianity had begun to decrease but the hype for spirituality increase. The commitment of some Christians had become lukewarm rather than passionate. Many found it hard to stand up for their beliefs and preferred “to belong to the world” (John 15:19).

Lord Jesus Himself had predicted this possibility, as well as the coming of false teachers when He said: “Watch out that no one deceives you. For many will come in my name, claiming: ‘I am the Christ,’ and will deceive many… At that time many will turn away from the faith and will betray and hate each other, and many false prophets will appear and deceive many people. Because of the increase of wickedness, the love of most will grow cold, but he who stands firm to the end will be saved” (Matthew 24:4-5, 10-13, NIV).

John counters two (2) major threads in the false teachings of the heretics in this letter:

1) They denied the reality of sin. John says that if we continue in sin, we can’t claim to belong to God. If we say we have no sin, we are only fooling ourselves and refusing to accept the truth (1 John 1:6, 8, 10)
2) They denied that Jesus was the Messiah – God in the flesh. John said that if we believe that Jesus was God incarnate and trust him for our salvation, we are children of God (1 John 2:22, 4:1-3)
[from Life Application Study Bible, NLT page 2015]

True in the time of John as it is today that the greatest danger to the Church seemed to come from within, from people who claimed to be believers but who were false teachers seeking to confuse the true believers and lead them into damnable false teachings. Happened in our churches today? Yes! Is 1 John irrelevant for today? Think again.
Now that we’ve identified who the author of 1 John was, why he wrote it, and the setting in which it was written, let’s get started on what I hope will be an exciting experience of growing, examining our beliefs, and purified our faith in Jesus Christ, the Son of God, the Lord. Remember, It’s All About Jesus.

CLICK TITLE to listen or watch These Short Studies of 1st Epistle of John
#1 Jesus: I Heard, Seen and Touched Him, No Secondhand Faith (1 John 1:1-2) https://youtu.be/eygEqZepw70 (Podcast: http://bit.ly/LegasiEpisode1)

#2 Jesus: The Reason for Authentic Fellowship and the Source of Real Joy (1 John 1:3-4) https://youtu.be/pC4LPn8Q-CA (Podcast: http://bit.ly/LegasiEpisode2)

#3 Jesus Is Light and There Is No Darkness in Him at All (1 John 1:5) https://youtu.be/LGS_Tnlokvo (Podcast: http://bit.ly/LegasiEpisode3)

#7 Jesus Is Not Only Our Saviour but He Also Our Example of Obedience & Living (1 John 2:3-6) https://youtu.be/NGC1UIHEclc (Podcast: http://bit.ly/LegasiEpisode7)

#13 Jesus reminds Us: Material Things have No Future and Will Pass Away (1 John 2:17) https://youtu.be/k3qOvQDXhyY (Podcast: http://bit.ly/LegasiEpisode13)

#17 Jesus is the Original Message: Remain Faithful to Him (1 John 2:24) https://youtu.be/tQnEhhTkv5I (Podcast: http://bit.ly/LegasiEpisode17)

Posted by Richard Angelus at 10:43 AM 0 comments 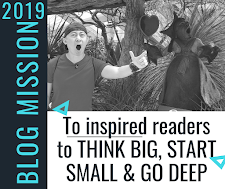 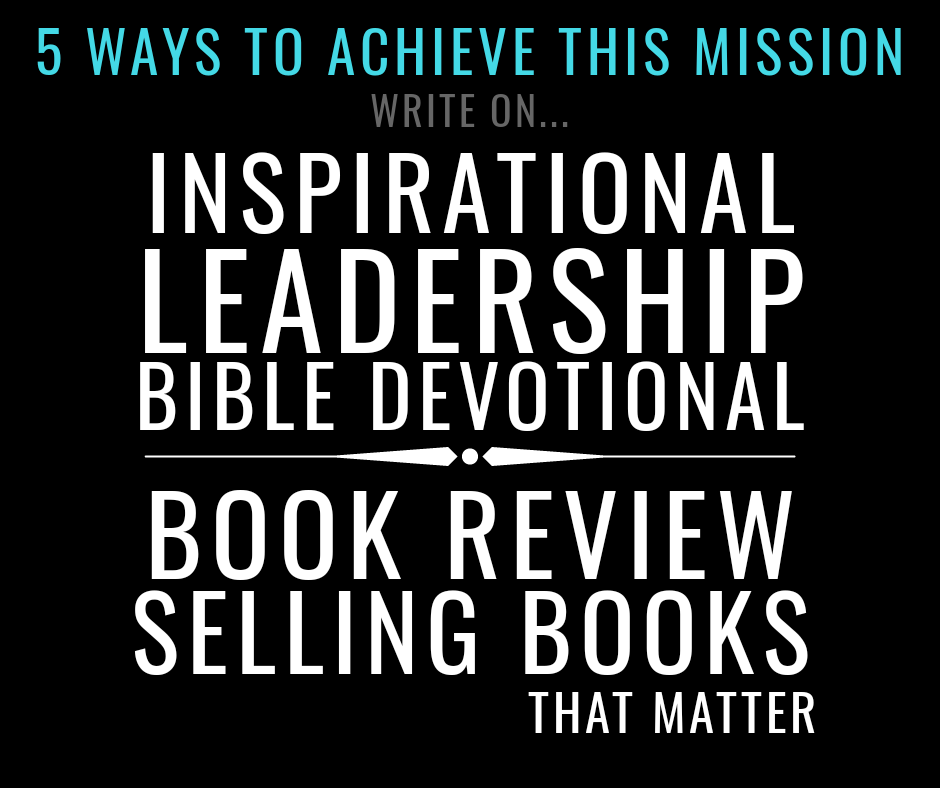 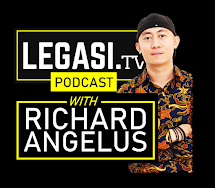 CLICK TITLE TO LISTEN TO (AUDIOBOOK) I REMEMBER JOHN SUNG 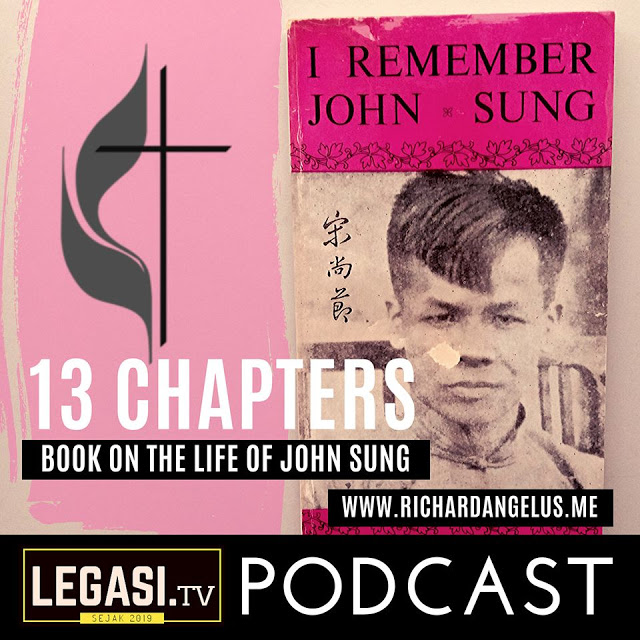 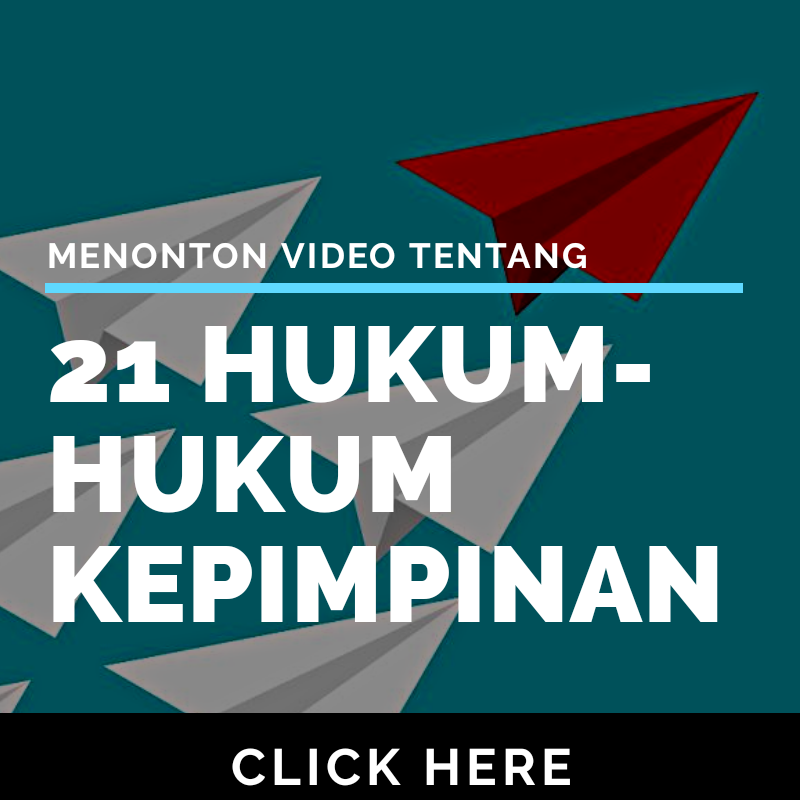