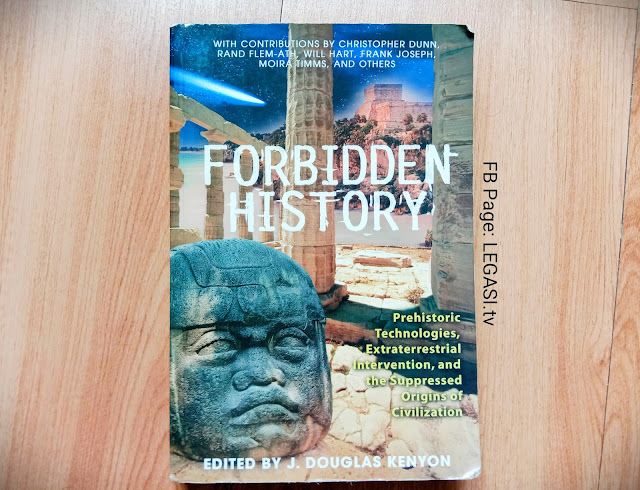 Fascinating! My curiosity on these subjects sparked by a British writer and journalist, Graham Hancock, author of Fingerprints of the Gods and Magicians of the Gods, where he outlines from archaeological and geological findings, astronomy and historical monuments, current science and old myths, that there is an unknown prehistoric ancient civilization(s?) with advanced technologies and scientific knowledge. I’ve listened to at least four of Hancock interview sessions with Joe Rogan in The Joe Rogan Experience podcast (mind you, each session is about 2-4 hours) and also have spent a great amount of time, say, about 6 hours+ of YouTube videos of any documentaries related to this topic – those who support and disapprove of this theory. I’m still skeptic but I must admit, this kind of theory and all the subjects above (see subtitle), really open my eyes to explore other alternative arguments as well.

During my research, I remember I have bought a book many years ago that also discuss these subjects. So, I dig boxes in my mini library and joyfully, I found it – Forbidden History. Just what I expected, the book mentions this theory, Graham Hancock, other theories, and those who have played leading roles in challenging the entrenched scientific establishment, assumptions, and status quo. I’m thrill! This book consists of 42 essays by 17 key thinkers taken from the bimonthly journal Atlantis Rising. The aim, writes J. Douglas Kenyon, is to “put forward such evidence, and to propose ideas and theories concerning the origins of life and the human race itself that may very well be more in accordance with reality than currently prevailing orthodoxy.” It is divided into six (6) parts:

What interesting about Part 1 is that the co-authors explain what I suspected for so long that Darwinism doesn’t just have a missing link but there are lots of missing links. Search for missing links is “futile” said Hill Hart. On the other hand, Creationism also encounters a problem “not in the idea of intelligent design, but in its dogmatic and inflexible interpretations of the Bible [or religion texts] concerning the debate over human origins,” explain David Lewis. We don’t have to choose between Darwinism or Creationism as it is known in the scientific community today, there is probably another alternative. Part 2 on Catastrophism, I think, is a very good case. One needs to study the works of Immanuel Velikovsky and Robert Schoch to see the plausibility of this theory. The global flood told in most of the ancient myths may be true. Part 3, 4 & 5 brings back my wonder about the extravagance of Egyptian Sphinx, the mystery of Great Pyramid, astronomic knowledge of ancient Mayan, the legend of Atlantis, the unexplained monuments around the world, and many more. Part 6 requires true believers. It explores the possibility of visitors from beyond (aliens), space artifacts, and complex/intelligent signals from another galaxy.

I’m almost convince - but not yet - that there is a prehistoric ancient civilization(s), maybe before the flood in Genesis 7; I’m still processing the implications of extraterrestrials to my belief in the God of the Bible (it seems impossible in a vast universe, we – human beings – are alone?); but overall, I’m still skeptical. It appears that the co-authors of Forbidden History have good evidences and somewhat fair in their assessments. Two scientists, for example, may look at the same evidence, but their conclusion can be different. My advice: read the current, standard history and – at the same time – forbidden, untold history.

Posted by Richard Angelus at 3:48 AM