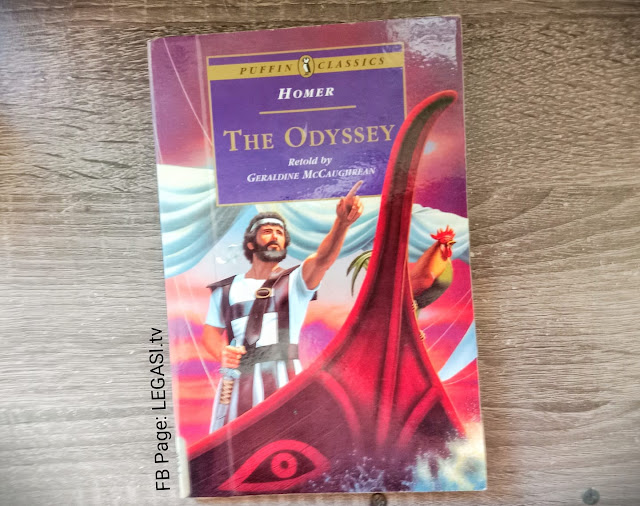 Many years ago, I try to finish reading Homer’s original English translations of Iliad and Odyssey (found 1 volume in the library), but I failed. Probably I wasn’t that interested in mythology before or my English wasn’t that good, or I thought it was a boring long-poem. Maybe, all. But perhaps what I need was not to know the whole story behind the poem but a retold that keeps the essentials and yet fun to read (and that may include reading children’s books). That is exactly what McCaughrean did to Homer’s Odyssey. Homer (presumably) was the first Greek writer whose works survive – perhaps the first Greek writer there was. In the Iliad, considered to be the earliest of the two, he wrote about the last few weeks of war between the Greeks and the Trojans, the imminent death of Achilles and the fall of Troy, the drama between mortal men and the gods.

Like something of a sequel, the Odyssey told the epic journey of Odysseus, warrior-king of Ithaca (fairly means “victim of enmity”), who sometimes known as Ulysses, sail back home after 10 years of war at Troy. But along the way, he and his soldiers encounter all kinds of enmities, dangers, and adventures, from Polyphemus the greedy one-eyed giant (son of Poseidon, the sea god), from the cannibal King Lamus of Laestrygonia, from the sorceress Circle, Scylla the six-headed sea monster and even the wrath of the gods themselves (how dare!) before he united with his wife, Penelope, and son. The journey takes another 10 years. “’Your son will be a big lad now, captain,’ said Polites. ‘Eleven! Almost eleven! He was only a baby when I left Ithaca. A fine help I’ve been to his mother, leaving her all alone.’ ‘Ah, but such a lady, captain! Such a lady never knew the meaning of impatience!’ Odysseus looked into the distance with unfocused eyes. ‘Indeed, yes, Polites. Such a woman.’”

One of the main questions that I have when I read this book is this: Why they encountered with these monsters and gods on the way back home to Ithaca and not when they went to Troy? Well, myth is a myth

Posted by Richard Angelus at 7:57 AM