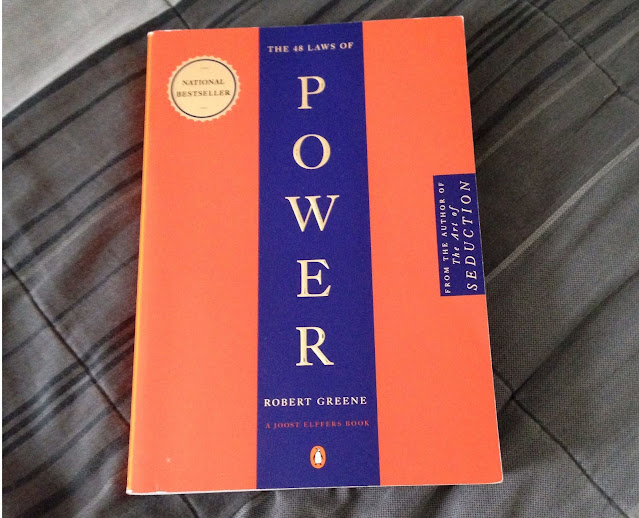 Robert Greene is a genius. He wrote books on strategy, seduction, human nature, and power. I have read The 50Th Law (co-author with Curtin Jackson a.k.a. 50 Cent), halfway through The Laws of Human Nature, listened to a dozen of his interviews, and just finished this book. What can I say? If you want to observe power, to gain power, and to arm yourself against power, this book is a great resource. Unfortunately, too, if you’re crazy for power as a dictator, you will get it if you apply (most of) these laws. These laws are amoral, meaning, they don’t concern either you will use it for good or evil.  Greene said in an interview with The Guardian, “I believe I described a reality that no other book tried to describe. I went to an extreme for literary purposes because I felt all the self-help books out there were so gooey and Pollyanna-ish and nauseating. It was making me angry." Some people like Will Smith and Jay-Z love this book and some consider it as a 'psychopath's bible.’ In Utah State Prison, two of Greene’s books The 48 Laws of Power and The Art of Seduction are banned. The reason? The authority says, “They’re all about manipulation.” Also, cunning and ruthless.

I say, this book is DANGEROUS – and dangerous doesn’t mean it's all bad. First, the laws are generally true (I think instead of calling these ‘laws’, ‘rules’ are better). For example, Law #1 Never Outshine the Master, Law #3 Conceal Your Intentions, and Law #20 Do Not Commit to Anyone. To some extent, in the beginning, these laws are true but unsustainable in the long run. Secondly, the laws are thought to be ‘realistic.’ “I’m not evil – I’m a realist,” explained Greene. My problem with this is that it is very subjective. For example, Law #2 Never Put Too Much Truth In Friends. Use Your Enemies, it not realistic at all. In the war, perhaps; in the movies, maybe; in my workplace, nonsense. Thirdly, most of the laws are opposite of my Christian values. This is a matter of faith, so if you’re not a Christian, ignore this one. Law #14 Pose As A Friend Work As A Spy, Law #15 Crush Your Enemy Totally, and Law #32 Play to People’s Fantasies, for example, are very intentionally divisive, deceiving and manipulative. Fourthly, (this is the good part) I use the laws to identify how people might use the laws against me, as protection. In a sense, if I use it as identifiers, then, I also acknowledge that some of these laws are realistic, right? So, you see, it is a DANGEROUS book. Partly true, partly realistic, partly evil 💪👌👐 #ServeToLead #1Book1Week #LetsMakeReadingCoolAgain #LeadersAreReaders #GrowingLeader #RobertGreene #TheLawsOfPower

Posted by Richard Angelus at 6:12 AM